View All Posts RME BlogUncategorized
« Back to All Articles

RME’s CSOO Jim Wood (far left) attends a Service Award ceremony in 2018 where several attendees received a 10-year Service Award to thank them for their tenure with RME.

An idea that originated through an employee engagement survey has become a reality for RME’s employees – who have reached career milestones during their tenure with the company.

With the original launch of the program aligning with RME’s own corporate 10-year milestone in 2017, the Service Awards have provided an opportunity to say thank-you to employees. RME’s Chief Sales and Operations Officer, Jim Wood, agreed immediately with the employee’s suggestion and worked quickly to make it a reality.

“I didn’t like our old program where if you were with us for five or 10 years, you were eligible to order various merchandise items such as luggage, appliances or other gift options with no formalities. I wanted something that meant more than receiving a gift in the mail; something more personable that included a formal presentation of the award from RME Senior Executive or Management.”

Alongside the 5, 10 and 15-year milestones, RME also wanted to ensure new employees were recognized, sooner than the previous program’s two-year award. Acknowledging those new hires after a one-year period and making them feel a part of the team sooner rather than later is important at RME. 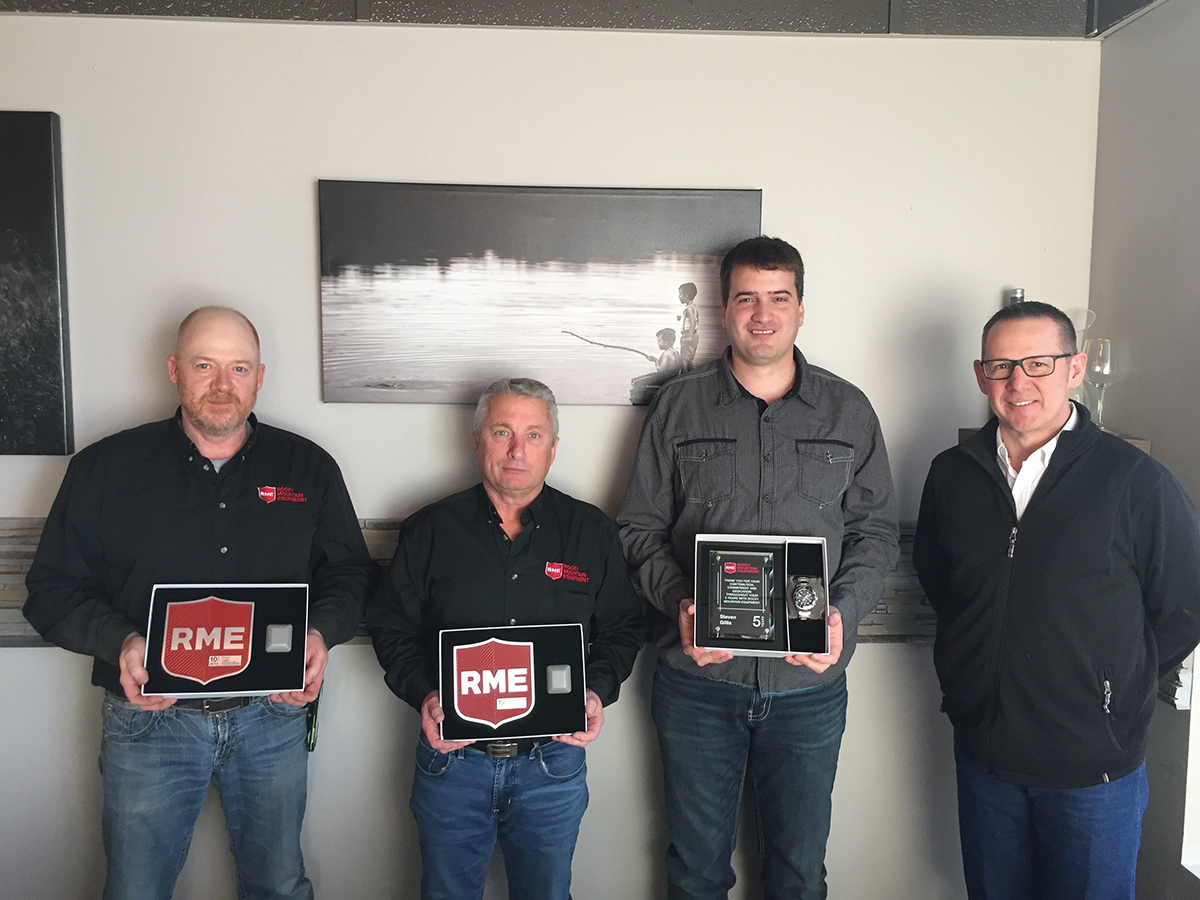 Sales Coordinator Alvin Hebert, located in RME Moososmin, received his 10-year award in December of 2019, which consisted of a ring and a plaque. Alvin has been with RME since July 2009 and he thinks the Service Awards are a great idea. “I think the awards helps provide everyone in the branch a goal to work towards. It was nice to be acknowledged in front of our peers at the recognition dinner,” he said. The awards themselves are determined by the milestone being celebrated.

The 1-year anniversary consists of a plaque and a pen, the 5-year anniversary is an RME branded watch with a plaque, the 10-year is an RME ring with a plaque and the 15-year is an RME ring with a stone and diamond along with a plaque. All awards are meant to be decorative, although the watch and the rings can be worn. “A lot of our staff don’t wear jewellery so it was imperative to also include a nice display, so your watch or ring can sit in the box along with the plaque and it looks like one piece,”said Jim. “Its rewarding for me to see all the plaques displayed throughout our employee’s work areas when I visit our branches; demonstrating their pride to be a RME employee and the years they have spent looking after our customers.”

If you are not familiar with STARS, they provide life-saving care for those in desperate need of medical attention using a fleet of cutting-edge helicopters to fly thousands of missions each year. STARS operates six air bases located in Winnipeg, Saskatoon, Regina, Grande Prairie, Edmonton, and Calgary—reaching almost every corner of RME’s network. As many … READ MORE

The Canadian Tractor Museum Honour the past, embrace the future. This is the sentiment behind RME’s most recent Community Investment initiative with the Canadian Tractor Museum, a world-class antique tractor museum in Westlock, AB. In order to help preserve Canada’s agricultural heritage, RME committed a $50,000 donation to the museum over the next five years. … READ MORE

It wasn’t a typical Monday for staff at RME Yorkton, although the day started out as any other day. That is, until a woman and her sister visited the branch and things took a turn. “I was walking down the stairs when Cheryl, our Branch Administrator, paged that medical assistance was required immediately–it was thought … READ MORE

Any cookies that may not be particularly necessary for the website to function and is used specifically to collect user personal data via analytics, ads, other embedded contents are termed as non-necessary cookies. It is mandatory to procure user consent prior to running these cookies on your website.